Are you in United States? This is the Papier

UK store, would you like to go to Papier

Recently put a ring on it? Or know somebody who has? Chances are then that an engagement party will soon be on the horizon to clink glasses and toast to the soon-to-be-betrothed. Not everybody has one of course. Plenty of couples prefer to keep things quiet, saving the celebration until the big day itself.

For those who do decide to put on a bash, it’s a good opportunity for future wedding guests to get to know one another. And if you’re planning a long engagement, it can feel like too long of a wait until the wedding to raise a glass to the happy news.

Like with any wedding-related activity though, there’s a barrel of questions that might be going around everybody’s minds, from whether you’re meant to take a congratulations gift to what on earth to wear. That’s why the Papier team have come together to try to preempt and answer any engagement party etiquette conundrums that might be on the tip of your tongue...

Who hosts the engagement party?

Now that depends. Traditionally, it’s the parents of the bride who would throw the engagement party. And for lots of families, it’s a tradition being kept alive and kicking. They manage the guest list so that it’s a mixed bag of family, family friends and the happy couple’s inner circle, and they’ll typically sort out all of the logistics too (bonus).

But these days it’s also just as common for the couple to host the engagement party for themselves. This is your moment to set the scene, the style and the vibe for your wedding day. Non-traditionalists love to plan their own celebration because they get to decide where and when it’s going to be and who’ll make the guest list. It’s almost like a practice run, on a MUCH smaller scale, for the main event – whenever that’s going to be.

Who knows, there might even be more than one engagement celebration – one that’s more of a formal family affair and another, more raucous par-tay with friends. Either way, you should expect the toasting to take place in the early engagement days, while the news is still hot off the press and the butterflies are still fluttering left, right and centre. 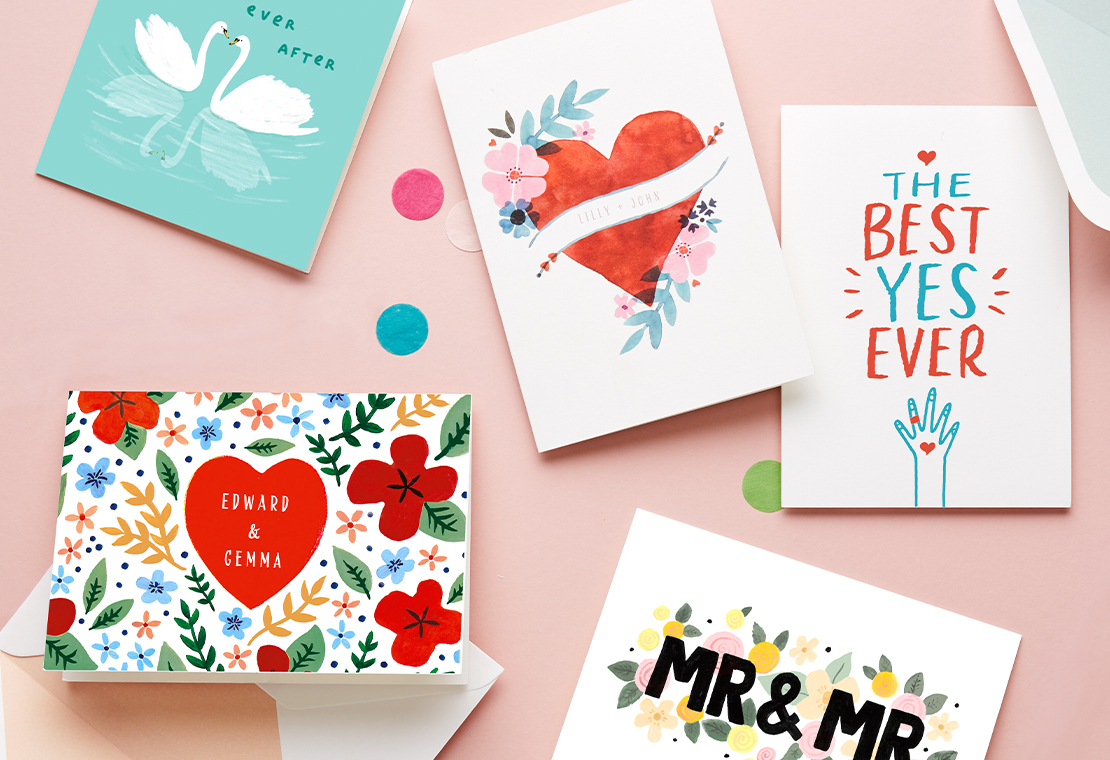 Who pays for an engagement party?

And so the money talk begins. It never takes too long before conversations around budget, savings and who’s paying for what to begin. And while the classic British tendency for money chat to seem a bit too vulgar, it’s kind of crucial before any proper wedding planning can get going – including the engagement party.

But this conversation’s probably more straightforward than the ones to come. The general rule of thumb is whoever’s planning the party pays. If you’re arranging your own one though and a kind parent, doting sibling, pockets-heavy distant relative or even a generous gang of friends who all want to chip in, then the choice is yours as to whether you accept or politely decline.

Remember, just like with your wedding, an engagement party can be as sweet and simple or as big and fancy as you like. You can really flash the cash and opt for the open bar, private hire and gift bags pomp and ceremony. Or, just have everyone over to your place for a BYOB garden party (if the weather’s on your side and you have a garden of course) or get everybody down to the local pub and kit out a reserved area. Where there’s prosecco there’s always a party.

Who do you invite to an engagement party?

Now to the guest list – usually the trickiest part of any party planning.

The quick and easy answer is this – invite who you genuinely want to be there with you. It’s not always as straightforward and plain-sailing as this, but it’s a good one to keep forefront of mind at the very least. Wherever there’s a wedding, there’s pressure to invite so-and-so number one, two, three and four (probably even more than that), because you feel like you should.

A lot of couples find it harder to say no to inviting people to the wedding unless you’re having a very intimate ceremony and reception. But announcing that your engagement party is just for a select few can feel like an easier sentence to utter to expectant family members. Sometimes your choice of your engagement party venue restricts numbers, which can be very helpful indeed if you’re trying to keep numbers down. “Oh, we wish we could invite Great, Great Uncle Bob and his third wife whose name we don’t know, but there’s a maximum capacity of 30 people so we won’t be able to, sadly...”

To recap: rule number one is to remember this party is for the two of you and your wonderful news, so priority number one should be about having the people there who you want to share your news with. And that’s the only rule there is.

Do you get gifts for an engagement party?

In the number one spot for engagement party etiquette for guests is the question of to gift or not to gift?

Casting our minds back again for a moment, the old-school engagement party hosted by the bride-to-be’s family was usually a surprise affair – for the guests anyway. The bride’s father would get everybody over and at some point during the meal, stand up, clear his throat, and once all eyes were on him, he’d share the big news. That meant that nobody could have brought an engagement gift with them, because they’d have had no idea it was an engagement party they were coming to. So, the question of gifts at an engagement party comes down to how traditional you’re going to go.

Engagement gifts aren’t yet as much of a ‘thing’ as a wedding present, where it really is expected that you’ll give (and want to give) a gift to the newlyweds. So if you were to go along empty handed, you’re unlikely to be booed out of the room.

That being said, engagement gifts as a term is something you’ll see on websites far and wide. If in any doubt and if in any fear of appearing stingy, head to the bar and buy the happy couple a glass of fizz – a more than appropriate engagement party gift to send them on their way. 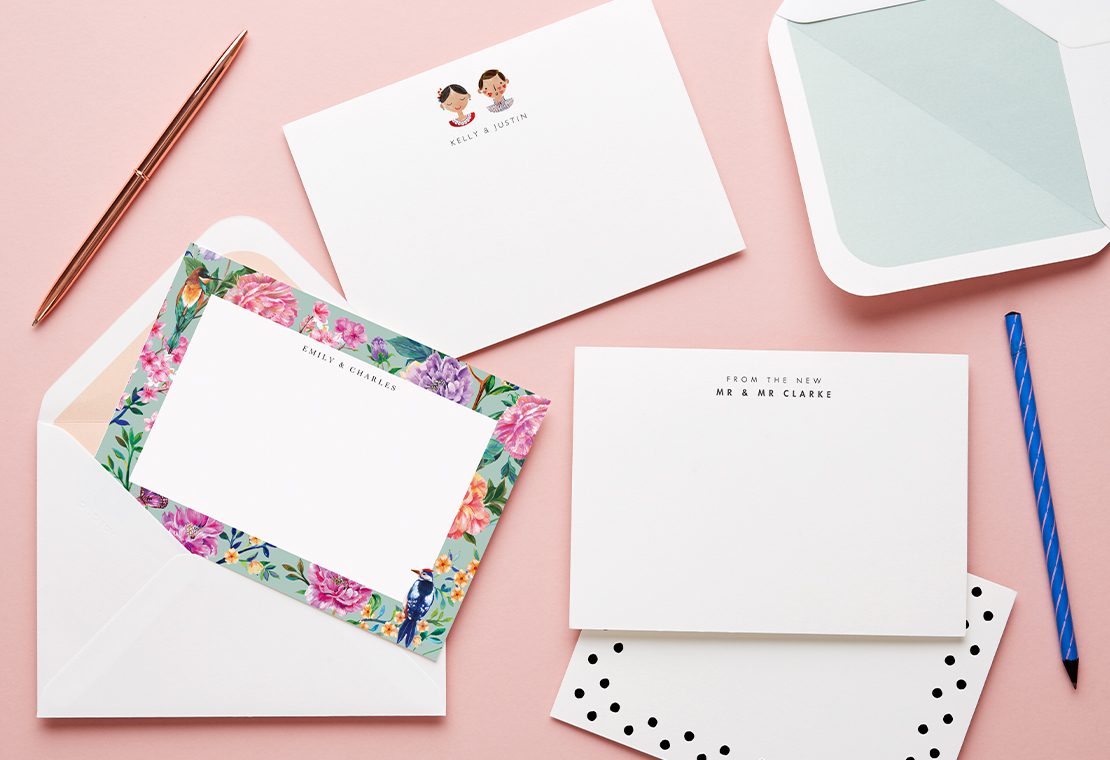 What are good engagement gift ideas?

On the topic of fizz, champagne-related gifts are spot-on for an engagement. Think celebratory, engraved champagne flutes for two, a set of vintage champagne saucers or a bottle of something fancy, like Bolly darling.

A wedding planner or his and hers vow books make a thoughtful, paper-based gift that they can fill with wedding inspiration and ideas – a personalised Papier notebook does the job perfectly! Plus, it’s something they might want to keep, stashing away in a wedding memories box to look back on several anniversaries down the line.

But if you want to get them something that’s more of an experience than a to-have-and-to-hold gift, book them afternoon tea somewhere special so they can have their own celebration for two, or a manicure to make sure that ring finger is looking its very best to show off the newly-donned sparkle.

Are you supposed to give money at an engagement party?

Let’s be bold here and go straight in with honest truth – money’s always going to be an appreciated gift (end of), but especially when there’s a wedding to plan. It’s not your standard wedding engagement gift, but you can present it (pun intended) as a contribution towards a meaningful part of their day.

For example, a popular money-related gift from parents and godparents is a bigger sum towards the wedding dress. Or, for a more modest contribution, you might want to say it’s for confetti or save-the-dates. If you’re still unsure though, just know this – you absolutely aren't supposed or expected to turn up with your cheque book.

What do you wear to an engagement party? (And can you wear white?)

100% yes. The no-white-at-a-wedding thing is all about not stealing the limelight from the bride – though the veil, bouquet and marital glow should do the trick. But at the engagement do, white is fair game. Some couples decide to make it themed and some venues will make the dress code clear, but otherwise, any wardrobe decisions are yours to make entirely.

How do you congratulate on an engagement?

You know the saying, a card is better than a hundred presents… In all seriousness, whether there’s a party or not, whether you decide to send a gift or not, and whether you’ve seen them recently or not, sending a congratulations card is always the perfect place to start.

It’s more thoughtful than a text, it’s more meaningful than an e-card (nobody’s ever going to keep one of those or be able to display it proudly on their shelf or window ledge), and it’s a simple gesture that always goes a long way. Stamps at the ready!

What do you write in an engagement card?

Like with any card, say what comes naturally. The best card messages are when they’re genuine and not in any way forced – you can see right through it when they are. If you’re not a dab hand with speaking from the heart, keep it short and simple, with something like: We couldn’t be any happy for you if we tried. All our love, Jack and Vera.

You don’t even need to write their names; sometimes going straight in with your loving words can have more impact. But if you’re a budding novelist and for you, writing reams is like a duck taking to water, then think back to memories with your newly-engaged pals and recall on some of those to make it a piece of highly personalised prose.

People keep cards for occasions like an engagement so imagine them re-reading your special note over and over. Make it something for them to swoon over – they deserve it. 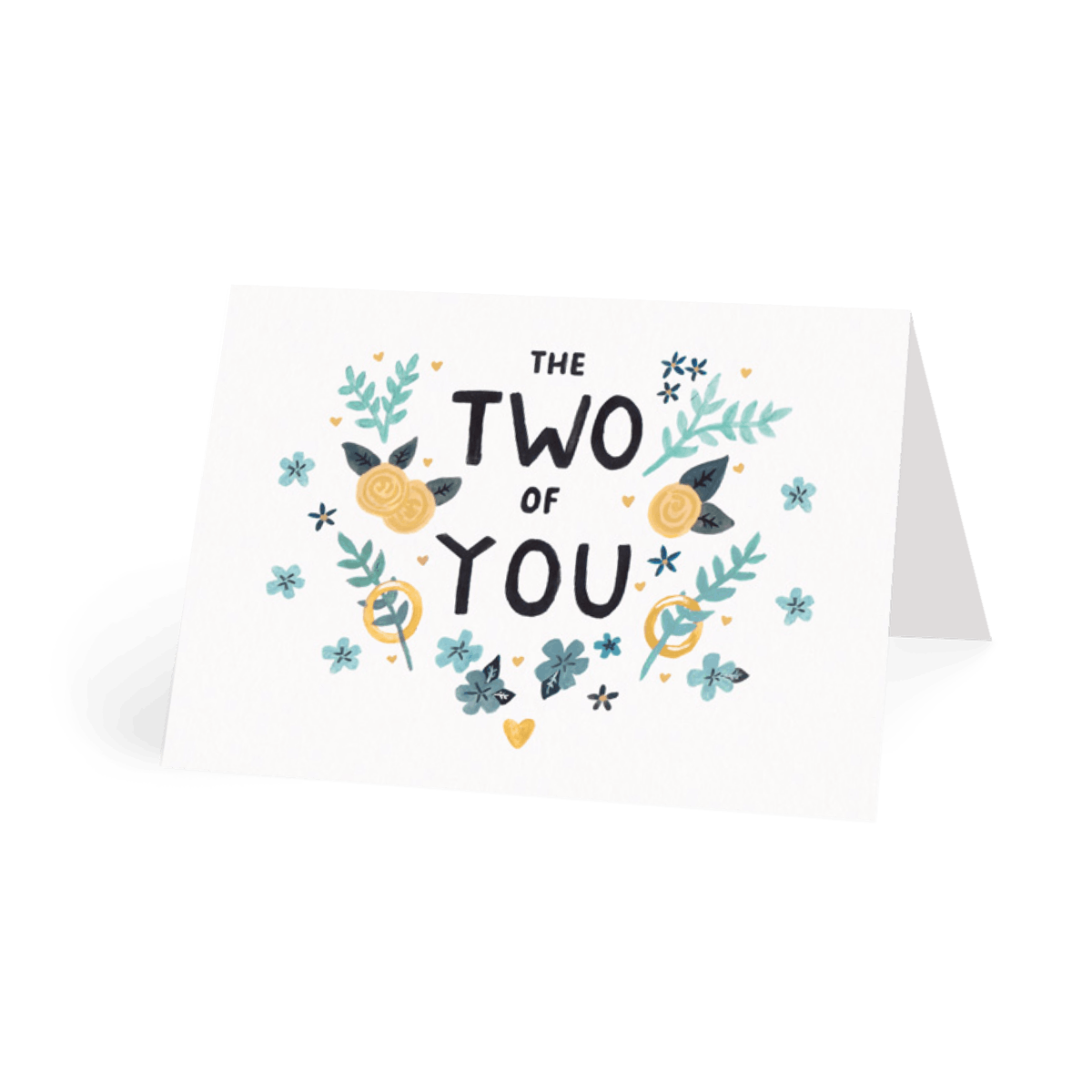 The Two Of You 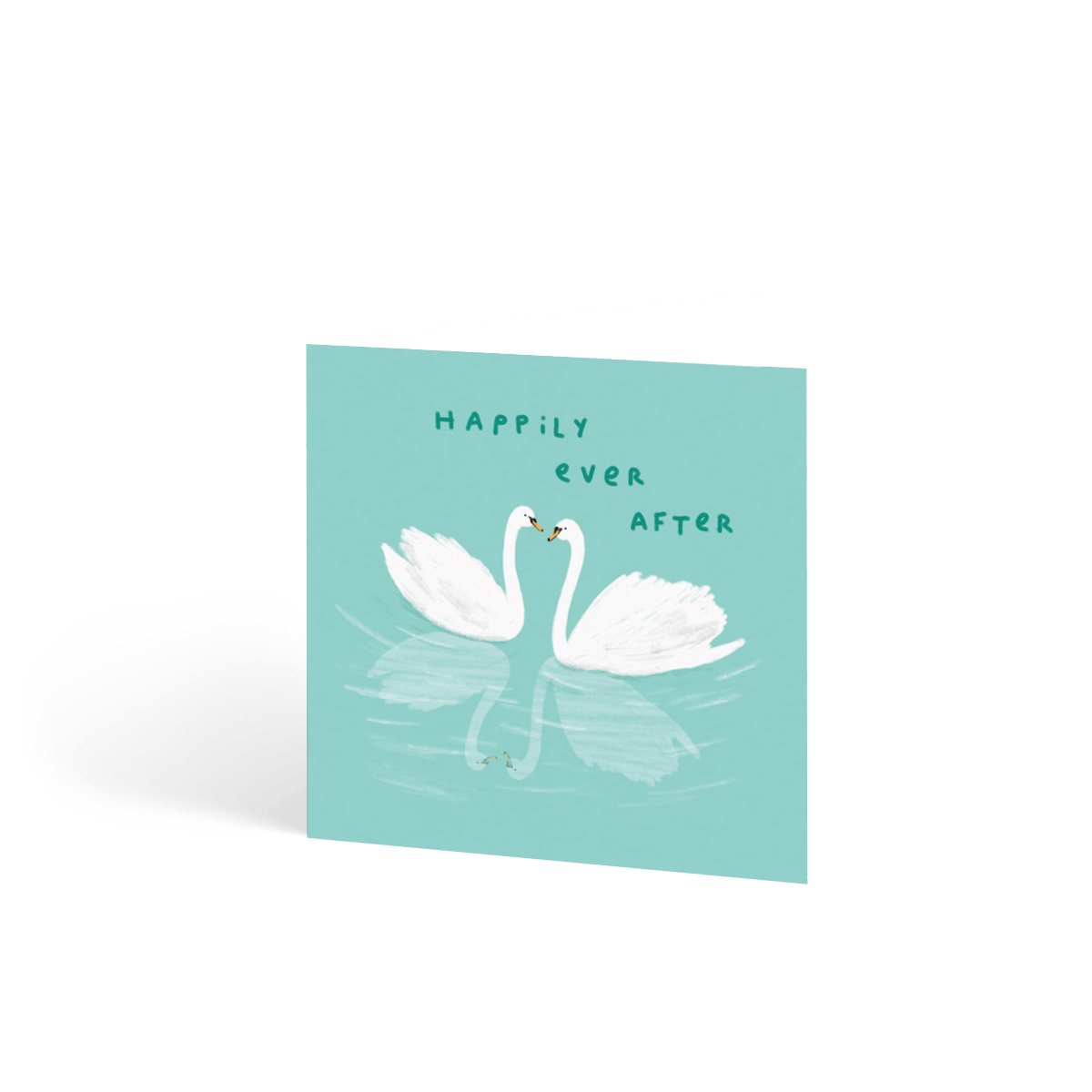 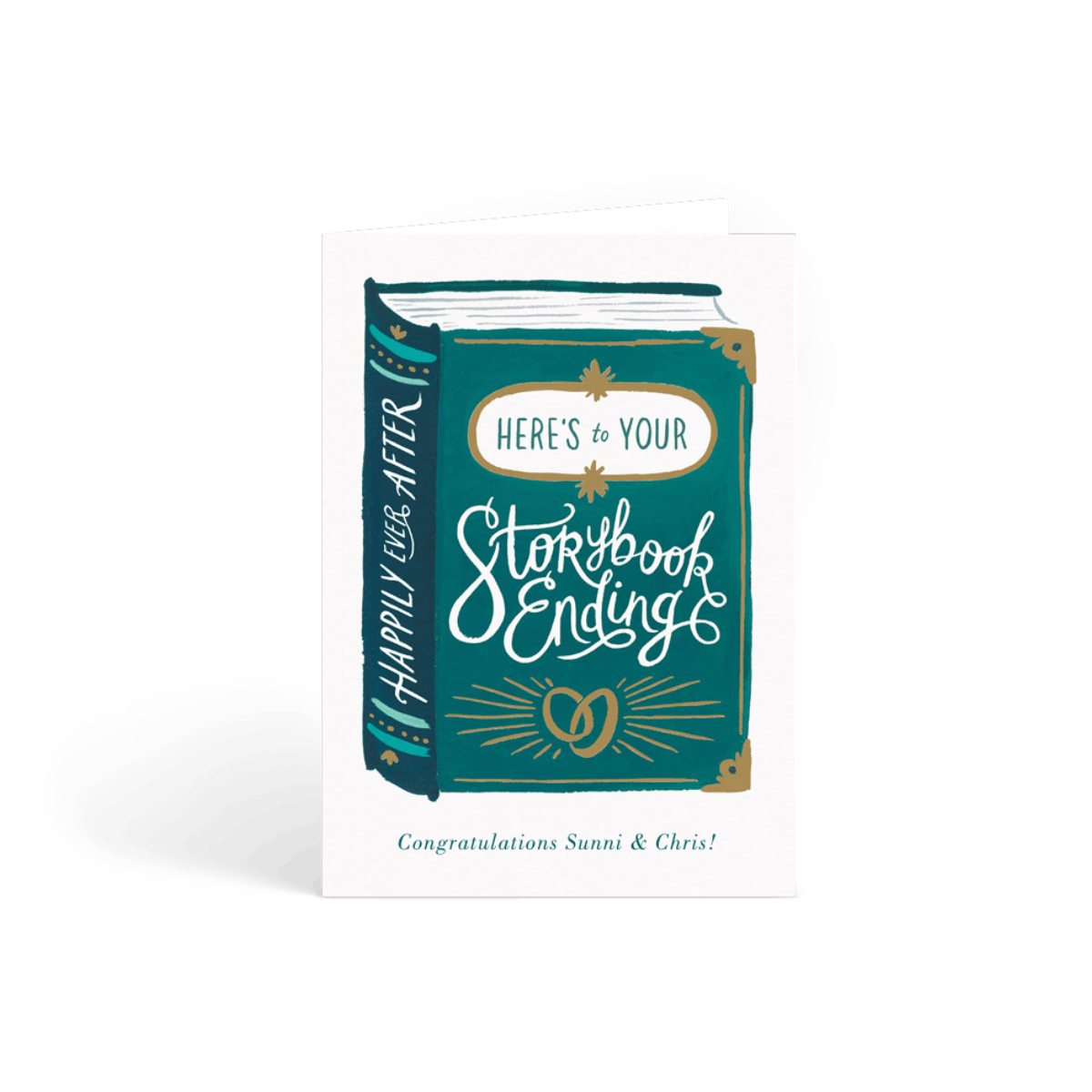 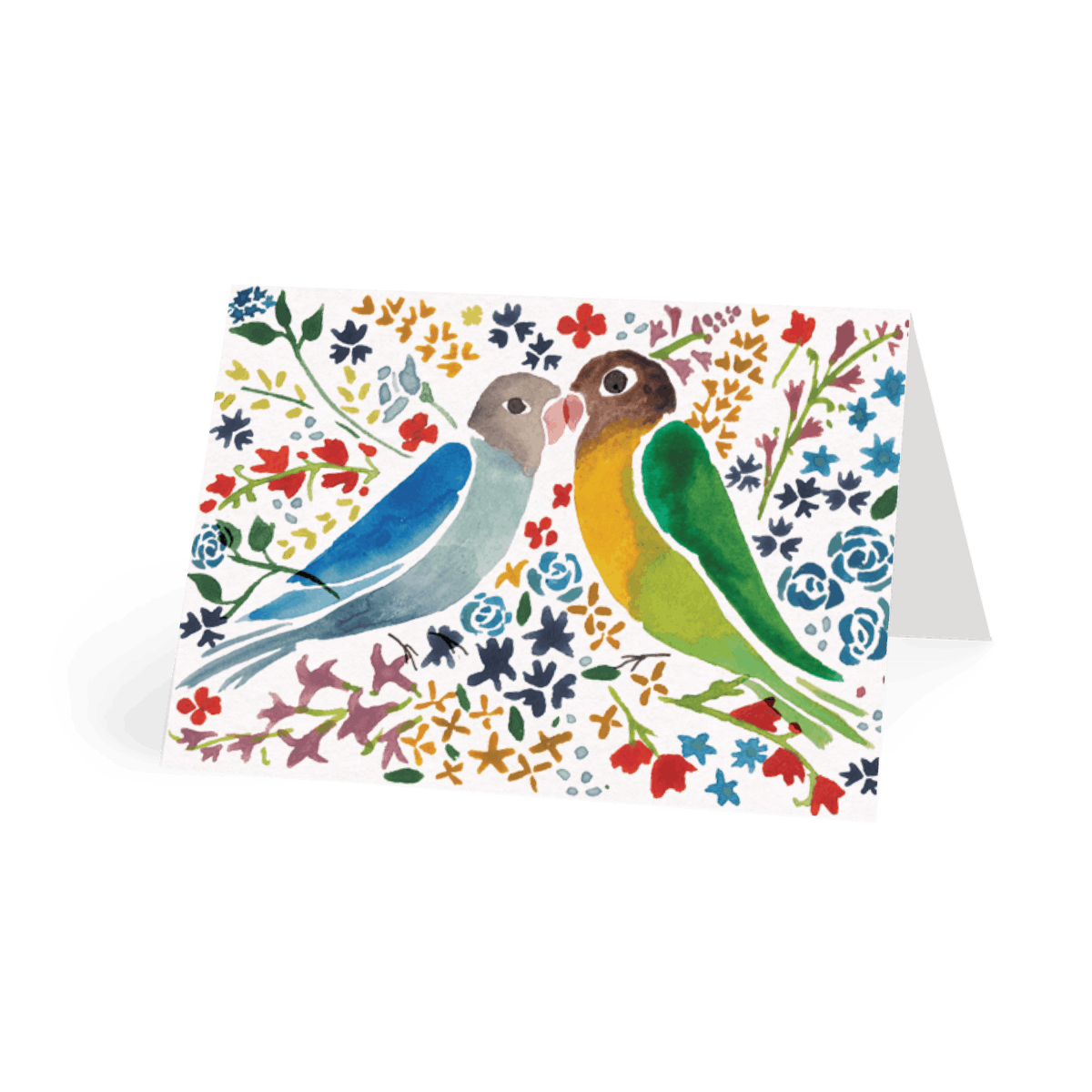 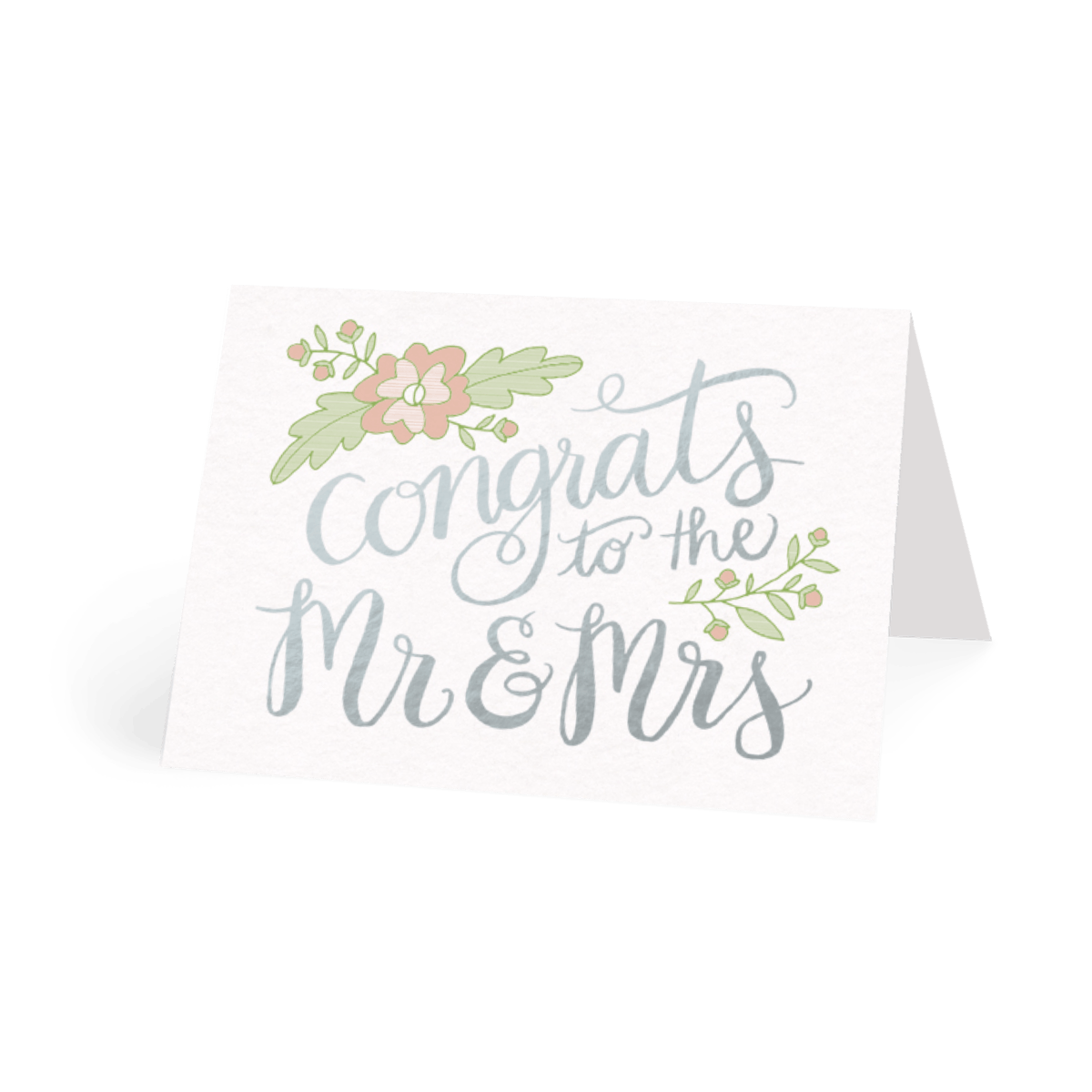 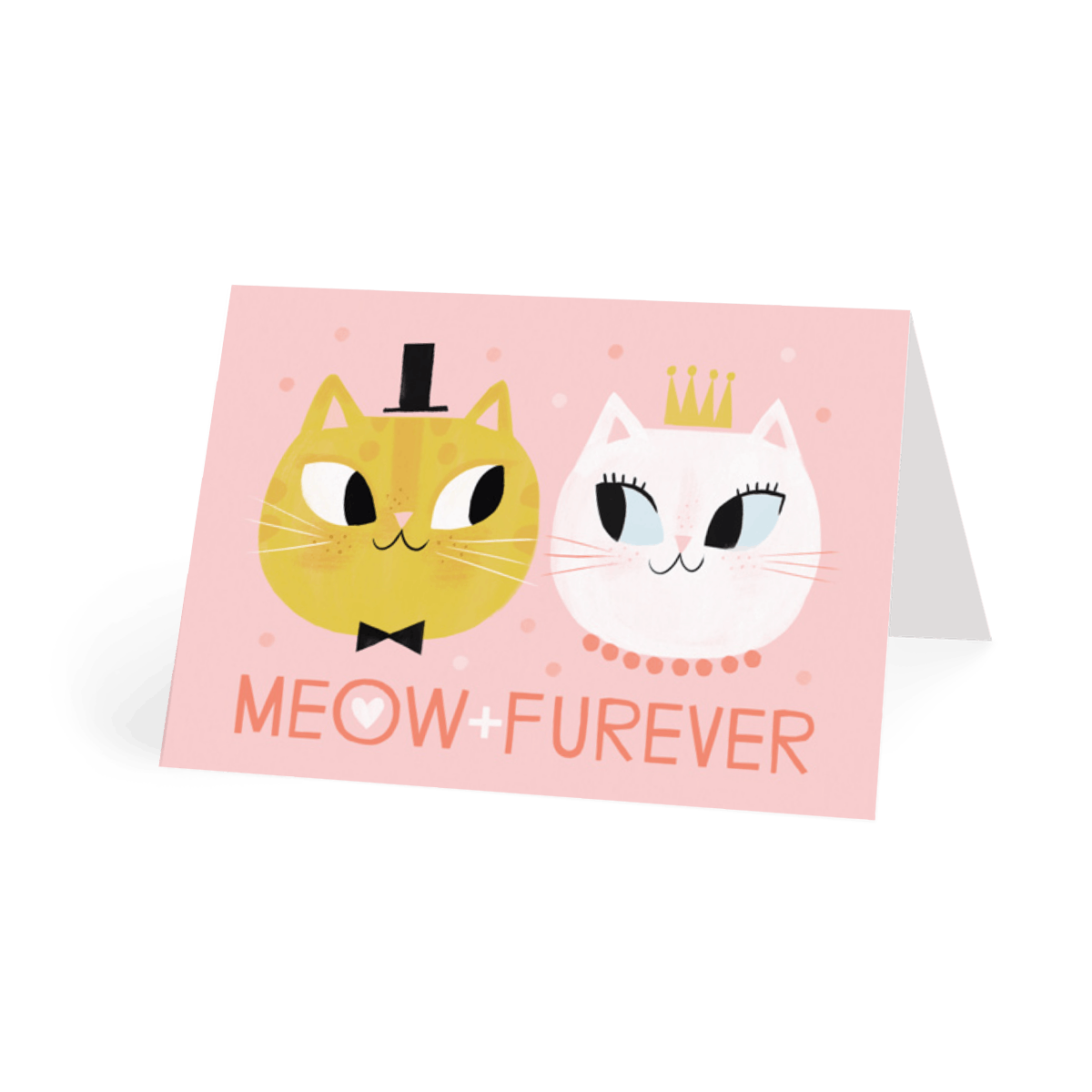 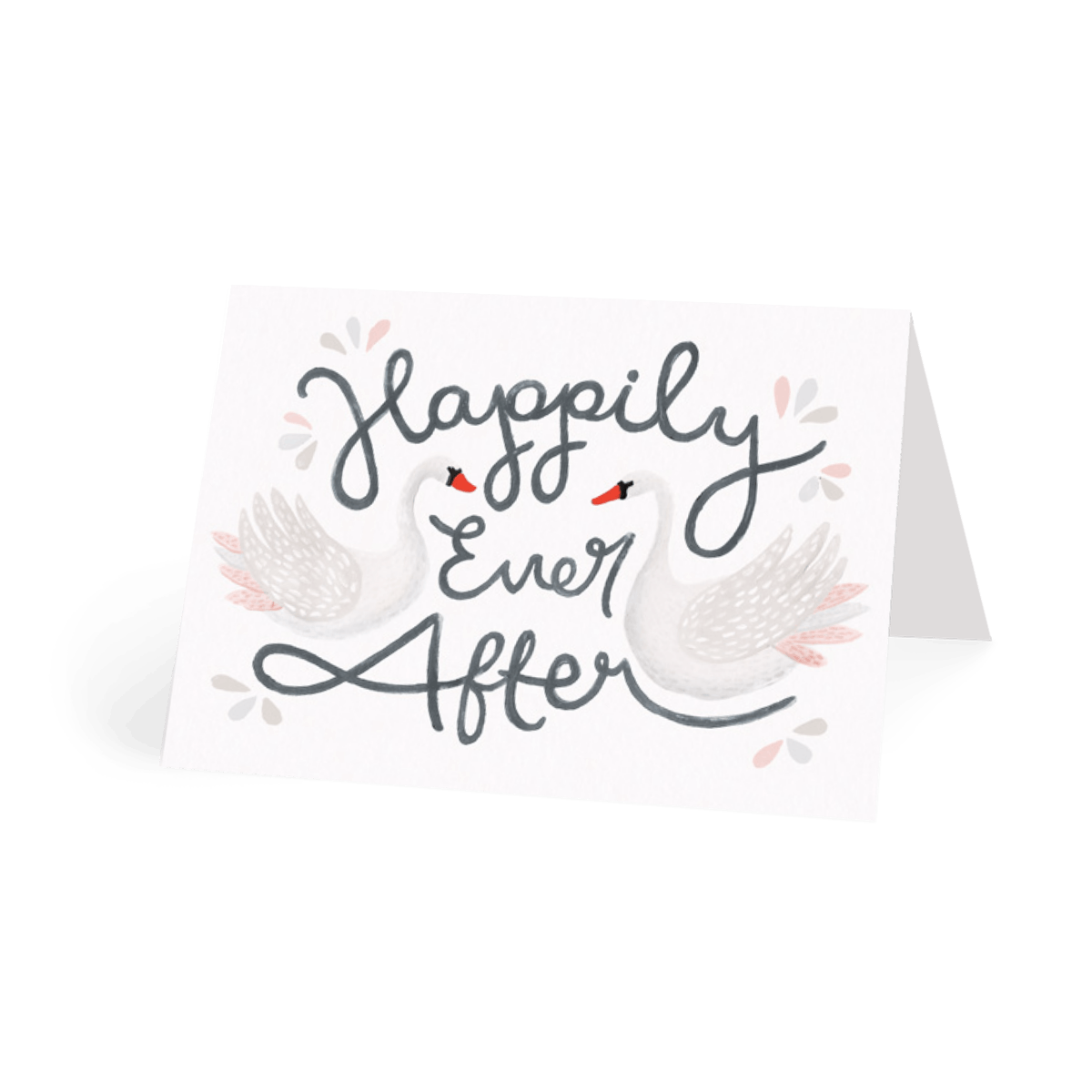 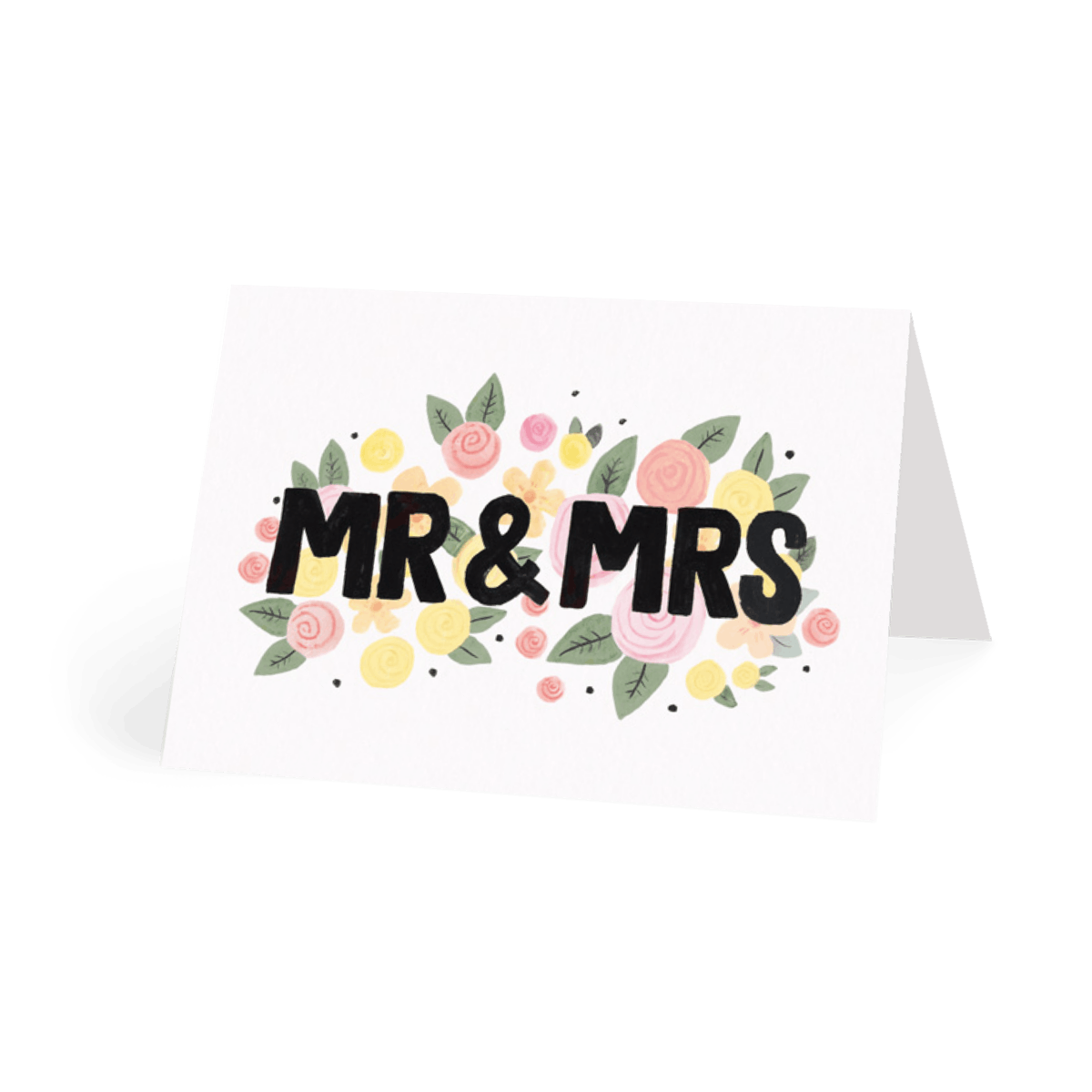 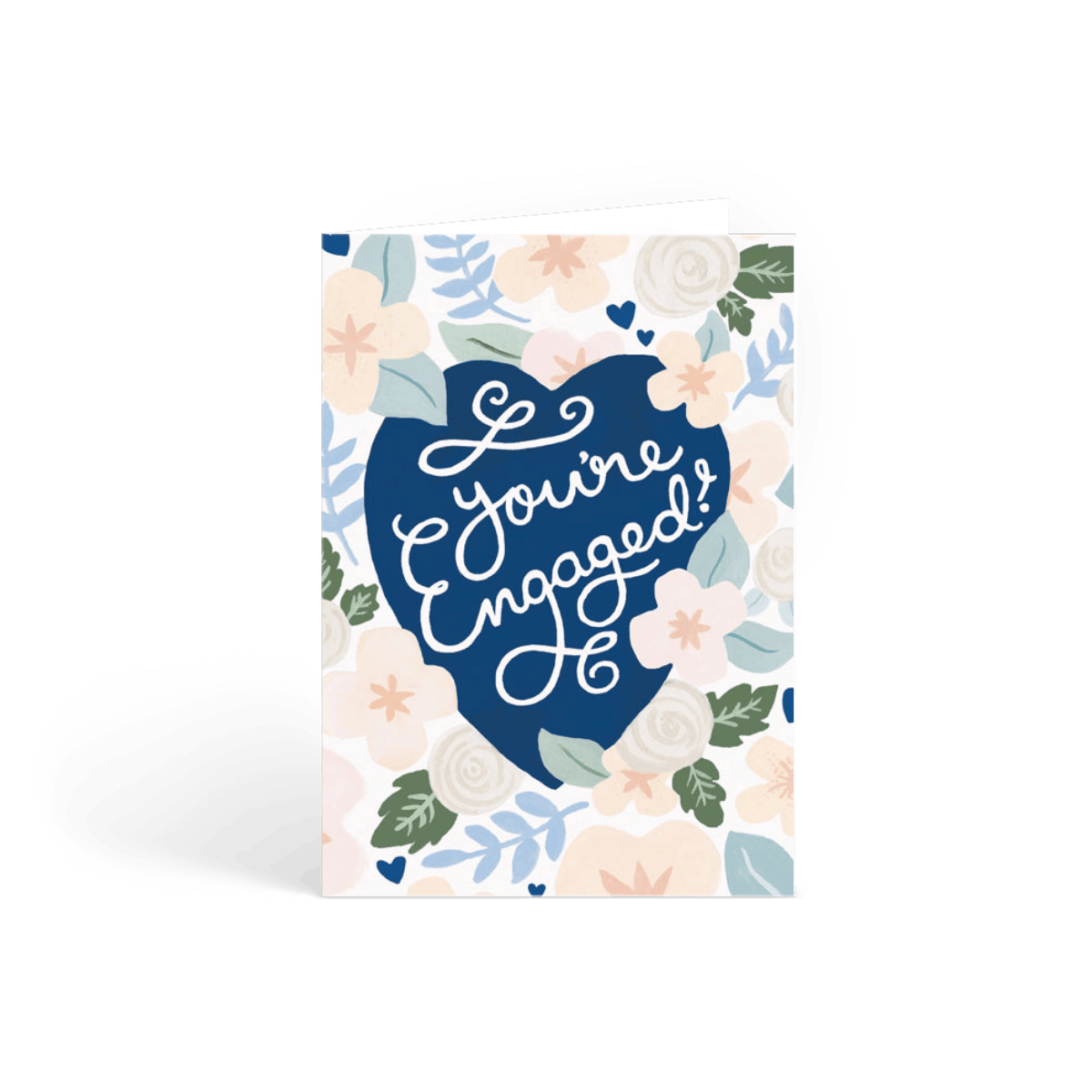 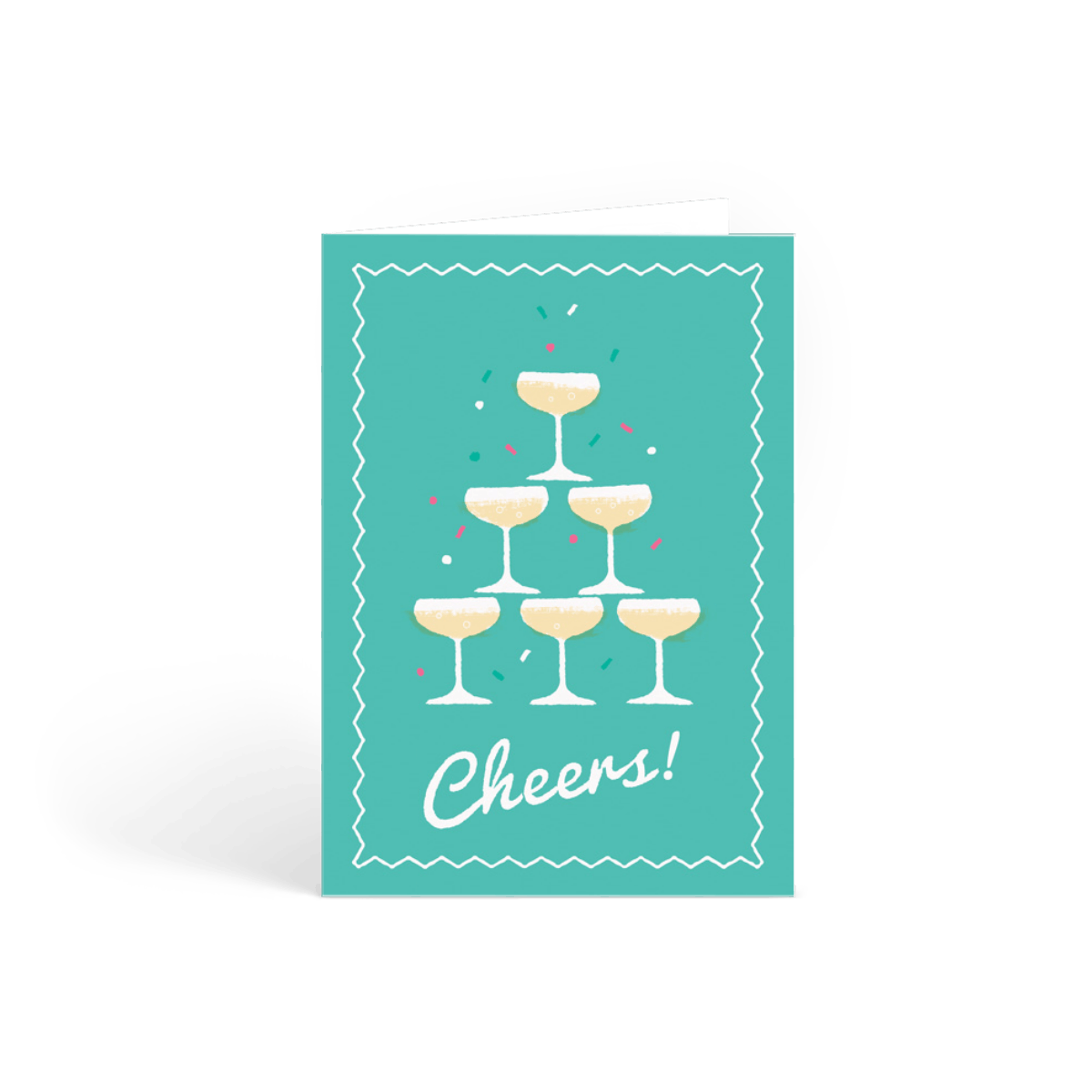 More info OK, got it