“A door!” said the Queen, her eyes blazing. “A door from the world of men! I have heard of such things.”

Edmund wasn’t listening. “It’s so cold here,” he said, kicking his feet free of snow that had fallen and settled in the short time he’d been talking to this woman. How his knees shook and his teeth shattered! “Why is it so cold? It’s not winter.”

“Why would you want that?” Edmund asked, incredulous. “Christmas is wonderful!”

“That is a matter of opinion,” the Queen replied sharply. Then she caught herself, and switched to more honeyed tones. “Son of Adam, you are right. It is terribly cold. Come sit by me, put this mantle around your shoulders and get warm. Would a hot drink help?” 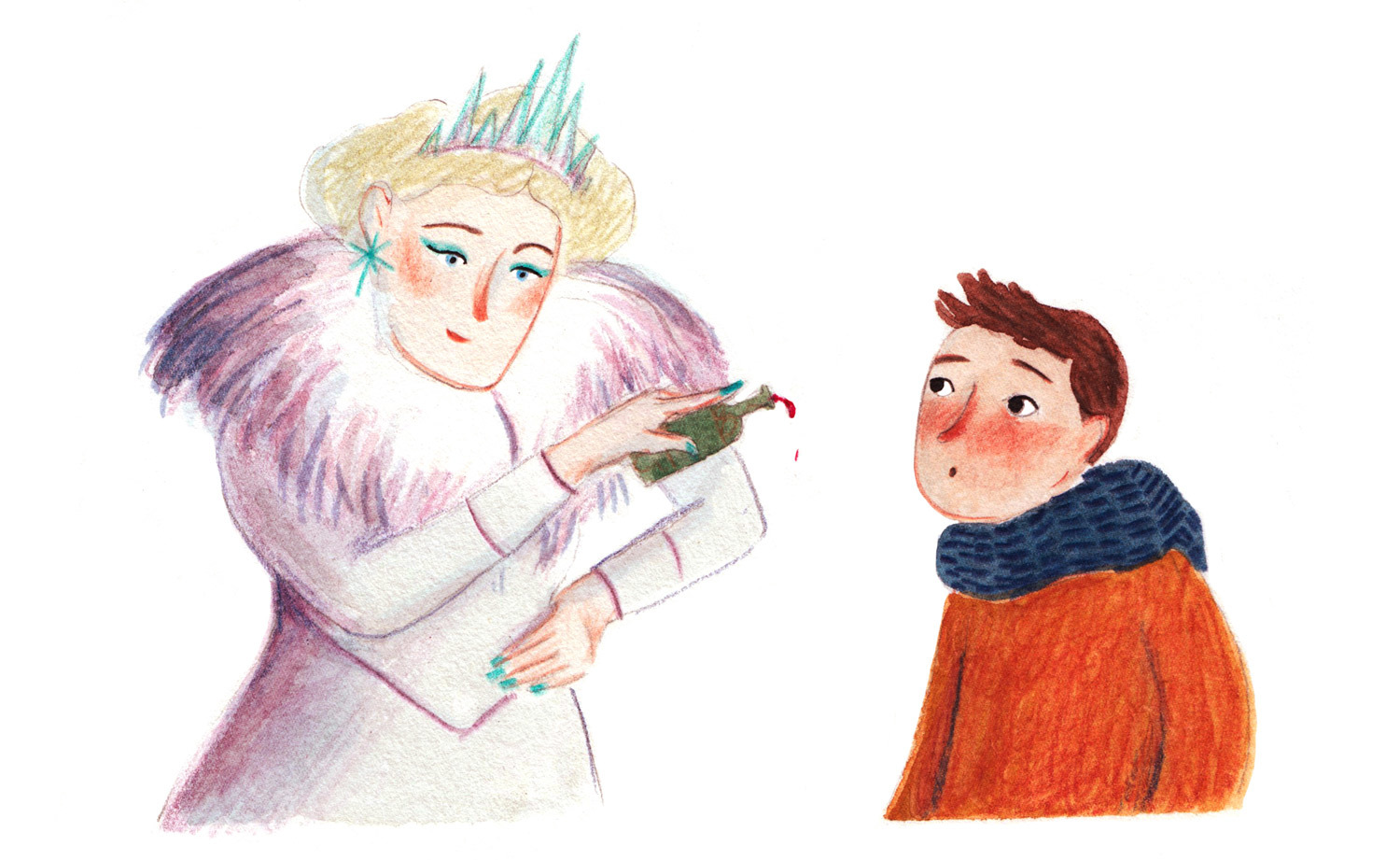 The Queen reached into her mink furs and produced a copper bottle. She tilted it, and a single drop of amber liquid fell on to the snow. There appeared a jewelled cup, from which plumes of steam rose. The Queen gestured at Edmund; transfixed, he lifted the cup and drank obediently. The drink, the colour of blanched almonds and slightly sweet, warmed him from the inside out.

The Queen’s voice brought him back to the moment: “It is dull, Son of Adam, to drink without eating. What would you like best to eat?”

Edmund paused, considering the question carefully. If his suspicions were correct, this woman, this witch – for that was surely what she was – would give him anything he asked for. “I would like…” he began, thinking of all the wonderful things he could plump for, all the things he could try. He took a deep breath. “Turkish delight, please.” He had never tasted Turkish delight, but he had always wanted to. It sounded so exotic.

The Queen reached into her furs again and retrieved the same bottle. She poured another drop onto the snow. This time, it transformed into a small round box with an emerald ribbon. Edmund untied the ribbon, and lifted the lid. The fragrant cubes looked like pieces of quartz, their colours dulled by a drift of icing sugar. 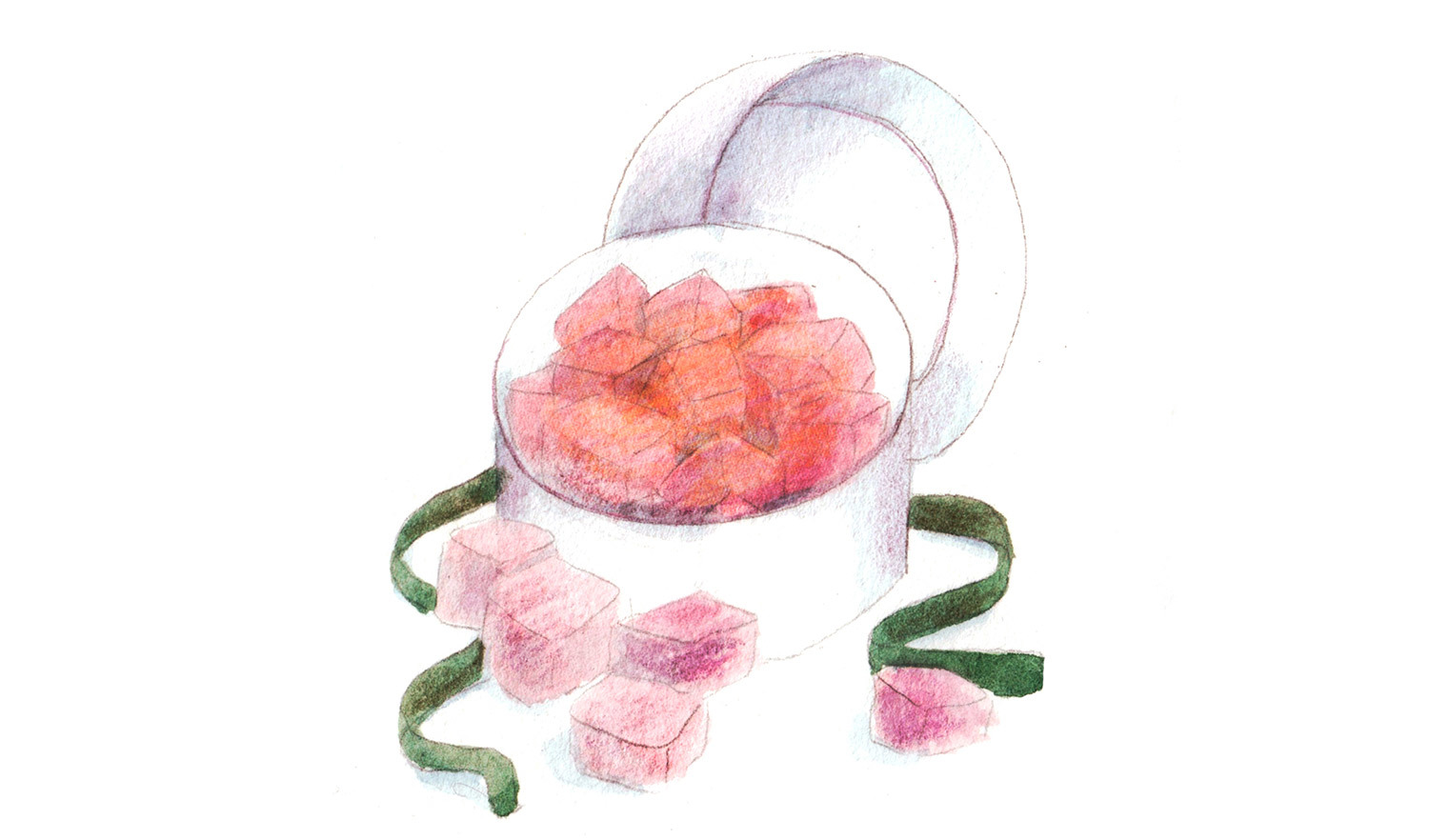 Reverently, Edmund picked up one of the cubes and popped it into his mouth. He had never tasted anything like it. It tasted like the flower water the housekeeper used when she pressed Father’s shirts.

As Edmund tried to politely swallow the strange sweets, the Queen began asking questions. Who had he travelled here with? His brothers and sisters? Where were they now? But Edmund couldn’t concentrate. All he could think about was the disgusting taste filling his mouth, the tickle of icing sugar up his nose. “I’m sorry,” he said to the Queen. “What were you saying?”

“I was asking about your family,” replied the Queen. “Where are they?”

“Nothing,” said Edmund, through a mouth of sticky rubber. ‘It’s just, the sweets, they... they taste of soap’, he finished bluntly.

“You are very rude,” replied the Queen. “This is what you asked for.”

“I’m sorry,” said Edmund. “I made a mistake. I don’t suppose I could switch it for something else? Do you have a Terry’s Chocolate Orange? Or… or… a sherbet fountain?” Edmund closed his eyes, picturing the sweets that he’d seen in shops, waiting to hear them drop onto the snow, just like the others had. He opened one eye.

The Queen was staring at him. She didn’t say anything. She looked weary. Edmund had the distinct impression he had failed her in some way he didn’t understand. “Why are you asking so many questions about my brothers and sisters? There’s nothing interesting about them. Don’t you have any brother or sisters?”

“I don’t have any family,” replied the Queen, coldly.

“Then what do you do at Christmas?” asked Edmund.

“Nothing,” said the Queen. “But then as we’ve established, here it is always winter, never Christmas. So it’s not really a problem.”

“But you must be so lonely,” Edmund said out loud before catching himself. “I mean…”

The Queen was looking down at the snow.

Suddenly, Edmund had an idea.

Inside the burrow, the fire burned. The table was laid out ready for dinner. As Edmund entered Mr and Mrs Beaver’s small home, he called out, “It’s me! I’ve brought a guest, I hope that’s OK!”

He stepped into the room. Behind him, the White Queen appeared, stooping through the doorway. She must have been seven feet tall. The room was barely lit, but every part of her – the porcelain skin, the fur cloak, the gown as white as egret feathers – seemed to glow.

The three other Pevensie children and Mr and Mrs Beaver looked at her, open-mouthed.“Edmund,” whispered Edmund’s sister, Susan. “What have you done?”

“I should go,” said the Queen.

“No,” said Mrs Beaver firmly. “All guests are welcome here. Please, sit down.”

The Queen sat at the Beavers’ wooden table, and took the cup of tea poured for her. The Beavers and the Pevensies, conscious of the awkwardness of the situation, began to make small talk. Hadn’t the snowstorm come out of the blue? It would be time to shore up the dam soon, wouldn’t it? Would you like some more tea? Soon, though, the forced pleasantries gave way to real chatter. The room filled with laughter, and a magic began to unfold that was not of the White Queen’s making. The cotton napkins by each diner’s side turned from white to gold, and folded into the shape of crackers, with scarlet ribbons cinching their ends. The steamed marmalade roll that sat proudly at the centre of the tabled transformed before the family’s eyes into a proud, plump Christmas pudding, with lapis-coloured brandy flames licking at its sides. Mr Beaver’s hat, perched on the hook on the back of the door, sprouted spiky leaves and carmine berries. The fir tree outside the lodge shook itself of snow, as garlands wound their way around its branches. Mr Beaver’s paw hovered above the Queen’s shoulder for a moment, before clasping it warmly. “Can I pass you bread and butter, your majesty?” he asked.

“Yes, please,” said the Queen in a small voice. “And please, call me Jadis.”

And then a further transformation occurred. The White Queen’s cheeks flushed, and a tentative smile spread across her face. She shrugged off her fur mantle – she found she didn’t need it anymore. As it fell from her shoulders, the children gasped: the Queen’s white gown had taken on every colour imaginable: violet and ochre, flamingo and cobalt, amethyst and amber, shot through with threads of gold. For if you come across a door and walk through it, you can find friendship, and magic, and even Christmas, on the other side. 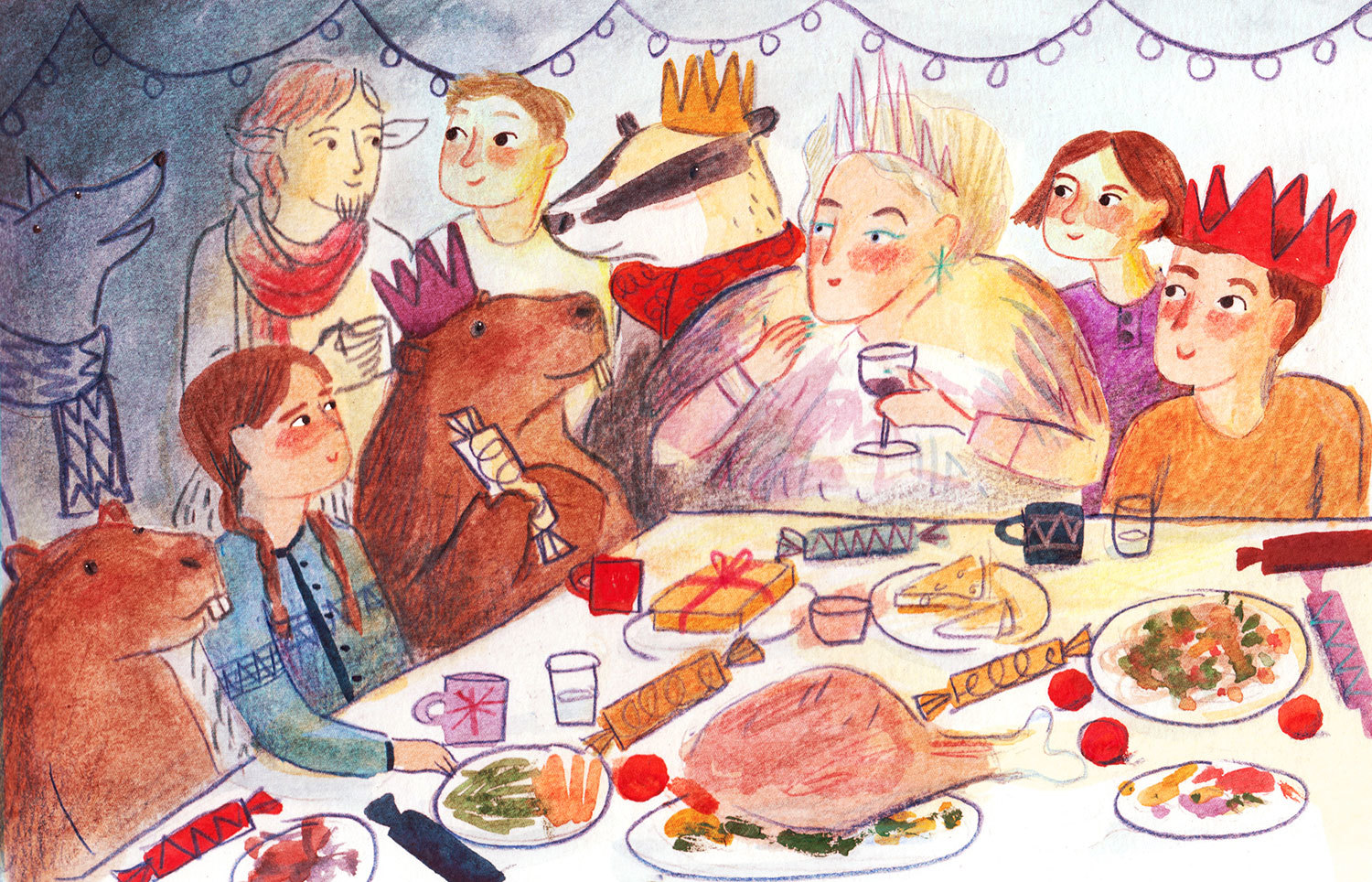 (With apologies to C.S. Lewis)

Olivia Potts is an award-winning food writer and chef, and is the author of the acclaimed A Half Baked Idea: How grief, love and cake took me from the courtroom to Le Cordon Bleu, published by Fig Tree and available here. 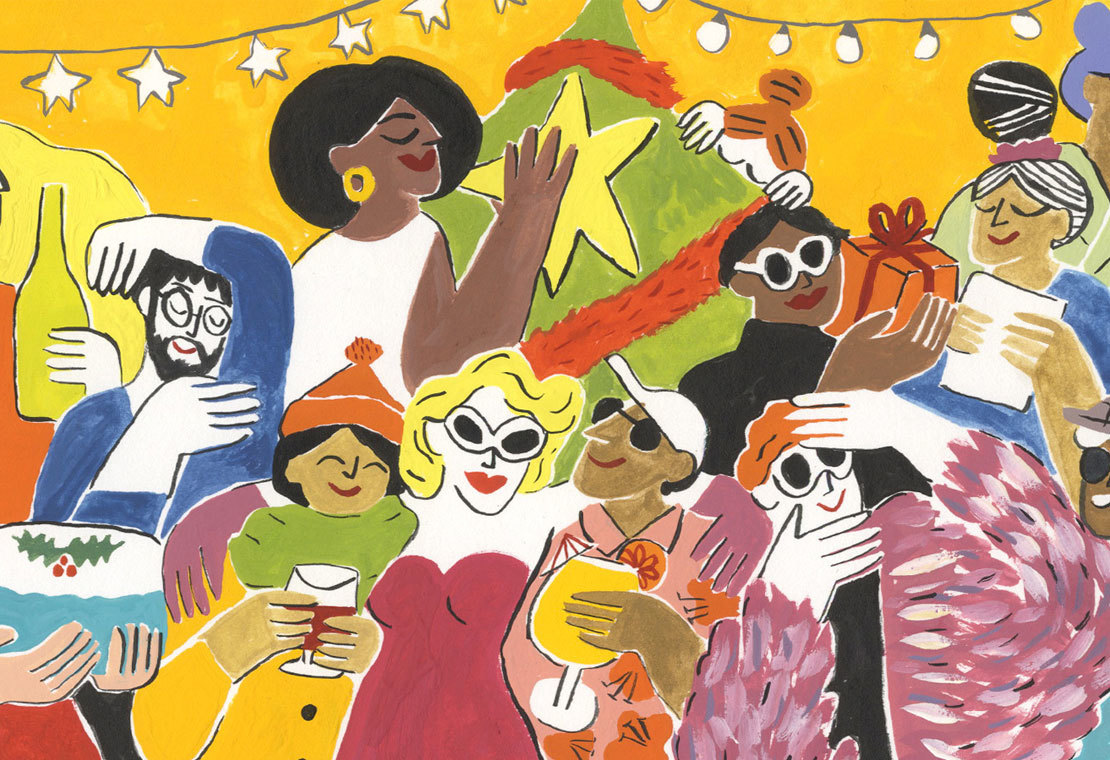 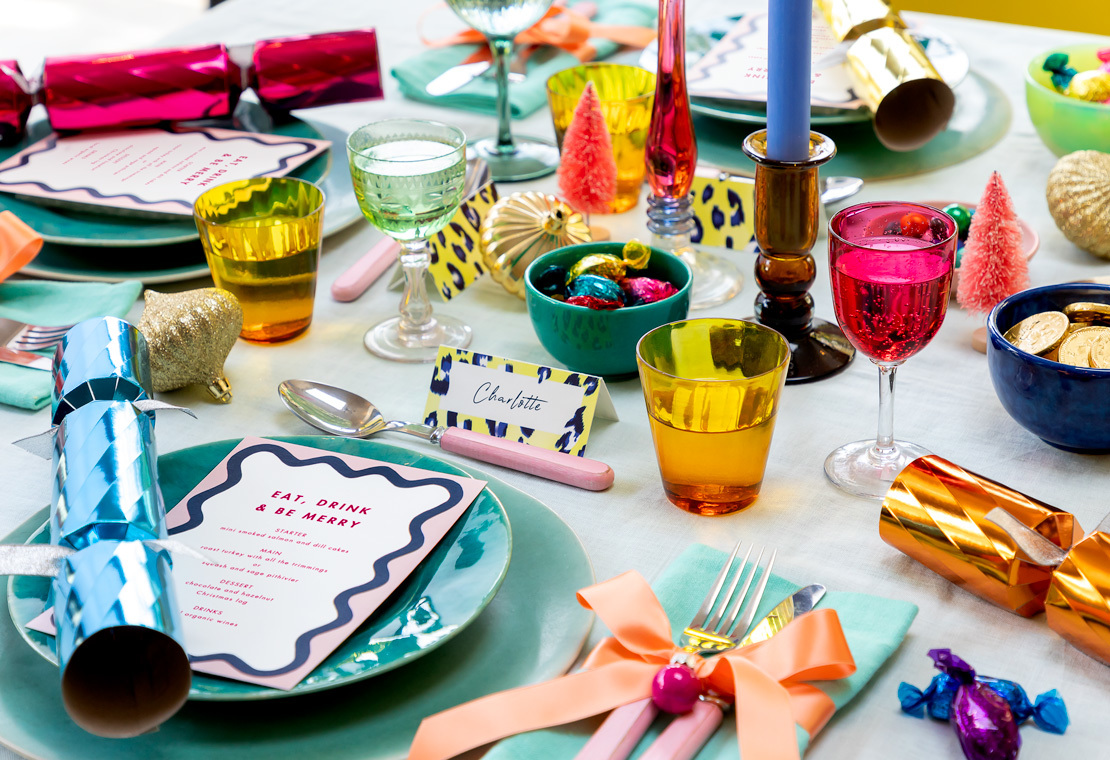